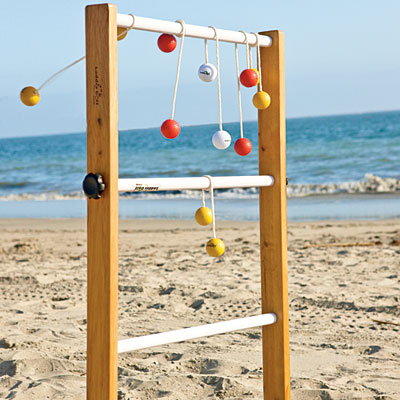 Ladder Golf is played with 2 or more players or teams. Each player has 3 golf ball bolas. A bola is 2 golf balls attached by a nylon rope. The object of the game is to wrap your bolas around the steps of the ladder.
The ladder consists of 3 steps, a top, middle and a bottom step.

Ladder Golf is played in rounds, each round consists of all players tossing 3 bolas. A coin toss is used to decide which player or team will toss first. The first player must toss all 3 bolas before the next player is able to toss his or her bolas. Bolas can be tossed in anyway the player chooses, as long as they are tossed individually and can be bounced off the ground. The winner of the round earns the first toss in the next round.

Games are played to an exact point total of 21.

In order to win, a player must be the only one to score exactly 21 points after the completion of a round.
If a player goes over the exact point total, that players points for that round do not count.
For example: A player with 18 points needs 3 points to get the exact score of 21 in order to win. If that player
has 5 points hanging on the ladder after all the players have tossed all strands, none of those points count
and the player will enter the next round with 18 points again needing 3 points to win.
In the case of a tie, the players that tie will play as many overtime rounds as needed until one player ends a
complete round 2 points ahead of the other player. The 2 point rule only applies in overtime rounds. During
regular play any player can win as long as that player is the only one to score an exact total of 21 points at
the end of that round no matter how many points the other players have.

Etiquette of the Game:

Basic etiquette of Ladder Golf states that contestants should make as many remarks, sounds or movements as possible during play in order to distract the opponent’s during play. Touching the player during tossing is never allowed.
In the course of play no contestant is to walk to the ladder prior to completion of the current round of play.

After all teams have tossed all their bolas, scoring is determined by the bolas that are still hanging from the steps. Players can knock-off bolas during the course of the game, in fact knocking-off other players bolas is encouraged and a good way to play defensively. bolas that are knocked off during play do not count as points. Only bolas that are left hanging after all bolas are tossed are counted as points.

Four players can play Ladder Golf by alternating play each round. Players simply alternate turns with teammates. Extra bolas can also be purchased so up to 4 players can play individually on the same ladder or a second ladder can be purchased for team play. With multiple ladders 2 players on opposite teams would be on one side and the other 2 opposing players would be at the other game ladder. One side would toss all bolas and the other team would toss them back. Same rules apply.

Bolas: A Bola consists of 2 golf balls attached together with a piece of nylon rope. Golf Balls are spaced 13” apart.
Ladder: The ladder is the structure that consists of 3 steps each spaced 13 inches apart.
Steps or Rungs: Each ladder has 3 steps. The top step is worth 3 points, the middle 2 and the bottom 1 point.
Toss Line: The line that the players tosses from. Officially is set to 15 feet. For backyard games 5 paces works fine.

Your ladder needs to be assembled prior to playing. Begin by fastening the 2 uprights to the 2 bases with the supplied knobs. After both uprights are fastened to the bases insert the round steps. The top and bottom step are identical and the middle step is the one with threads on the ends. Once all the steps are inserted screw in the remaining 2 knobs into both ends of the middle step. Do not over tighten the knobs on the middle step or use any tools to tighten them. The clearances on your new Ladder Golf game are very tight at first. The holes drilled in the ladder are meant to be tight and it will become easier to assemble after the first few times you assemble and disassemble the game set.

Safety Is Important In All Games:
Ladder Golf Storage and Cleaning:

Your new Ladder Golf game is made of premium products and designed to offer years of use. Though the
wood has been sealed, we recommend that the ladder is not left out in the weather.