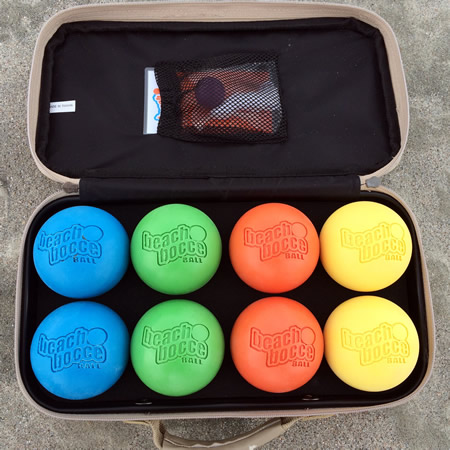 Beach Bocce is extremely simple. As with horseshoes, there’s a target, and you have to get as close to it as possible. What makes it so unpredictable and entertaining is that you can be winning for most of the game, and still lose suddenly at the end, or vice versa. Nothing is decided until the last player plays the very last ball. If he or she moves the aim ball or kicks an opponent ball out of the way, the layout of the balls (and your score) will change dramatically.
You should read about The Rules, but they’re really not required to have fun.

To Decide Who Throws First
Any player stands inside and tosses the jack away from the shooting circle. Each player tosses one of their
balls at the jack. The player with the ball closet to the jack throws first to begin a round.

Scoring
Once a round begins, the player or team trailing tosses balls until landing one closer to the jack than the nearest ball of their opponent. The round ends when all balls have been thrown.

Winner throws to begin a new round either from the original circle or by drawing a new circle at the jack’s
location at end of the previous round.

Game ends when player or team reaches 13 points, though any pre-determined total is acceptable.

Measuring string is provided for use on close calls

TIPS AND STRATEGIES
Check Out Our Other Services