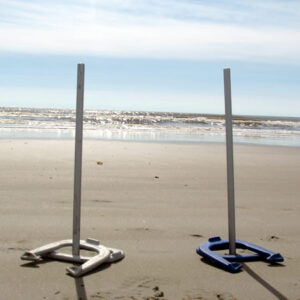 Players stand in a circle. The object is for players to maintain a volley themselves a number of times before passing the ball to the other player using paddles. The game begins with one player maintaining a volley of two bounces before he or she passes the ball to the other player. The next player with the ball maintains the same number of bounces plus one in his or her volley before passing it on. If a player lets the ball hit the sand or water, that player loses a point. The game is restarted with the player that lost a point maintaining a volley of only two bounces
per volley. Once a player has lost five points, that player is eliminated permanently from the game.

Scoring
Rental Categories
Check Out Our Other Services