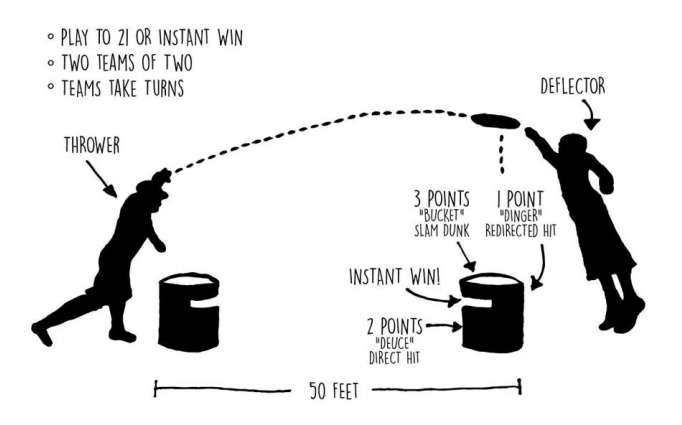 Object of the Game

Partners stand at opposite goals, alternating throwing and deflecting. One partner throws the flying disk and the other partner redirects it toward or into the goal. After both partners complete one throw each, the flying disk is passed to the opposing team. The game continues alternating team turns until an exact score of 21 is reached or there is an Instant Win scored. Kan-Jam is fast paced and play is continuous.

Dinger 1 point Redirected Hit Deflector redirects thrown disk to hit any side of the goal Deuce 2 points Direct Hit Thrower hits the side of the goal, unassisted by partner. Bucket 3 points Slam Dunk Deflector redirects the thrown disk and it lands inside the goal. Instant Win Game Over Direct Entry Thrower lands the disk inside the goal, unassisted by partner.

* *The disk can enter through the slot opening on the side or through the top of the goal. When an Instant Win occurs, the throwing team is declared the winner and the opposing team does not receive a “last toss” option.